In recent decades, various and emerging devices and devices, including solar cells, LEDs, displays, touch screens, etc., need transparent and conductive electrodes (TCE), which have high transparency and low resistance. . The first material used in this field was indium tin oxide (ITO), which is both a reliable material and has mechanical stability and establishes a logical relationship between strength and transparency, and therefore in TCEs. commercially are applicable. However, due to the high cost of production and low indium and the rigidity and fragility of ITO, its use in flexible and inexpensive devices such as electronic clothing, flexible solar cells and electronic skin is limited. For this purpose, materials have been introduced as alternatives to ITO, including nanostructured materials including carbon nanotubes (CNTs), graphene, metal nanowires, and conductive polymers. Among all the alternatives, the coating of electrospun fibers using metal, which has been studied in this activity, leads to the production of transparent and conductive electrodes with low resistance, high flexibility and transparency, and a reasonable production cost compared to other types of electrodes

Today, the need for transparent electrodes with high conductivity and low resistance in new electronic, medical and optical technologies is developing and expanding a lot. For example, it is used in gas sensors, LEDs, OLEDs, antistatic coatings, thermal mirror coatings, thermal coatings and solar cells.
The new generation of solar cells, which are used as window glass due to their high transparency (80 to 90% light transmission), are also made of these transparent electrodes. 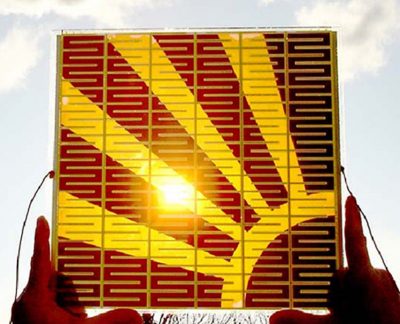 Nanofibers, due to their delicacy, obtain small thickness, and so extraordinary transparency and increase its flexibility. As a result, the main problem of ITO, which was its rigidity and fragility, has been solved in this method. The cost of producing the product in this method is less than ITO and other methods.

The method of depositing gold in this production method is such that it creates good stability and provides acceptable conductivity.