Water problems today are one of the most fundamental concerns of human society. There is no doubt that, in case of prolonged use, the oil crisis will take place in the water crisis. In Iran, rainfall is lower than global average. In some of the deprived areas of Iran, water rationing in order to bathe was even 8 liters per day. Therefore, one of the low – cost solutions for water treatment is the use of solar panels. desalination process with solar energy is a very efficient, clean and inexpensive method. This process is ideal for use in domestic and agricultural use, especially in remote, desirable, economic zones. In Iran, the amount of solar energy received about 1016 mw is the country’s level, which is particularly assessed in the positive desert regions. The most important freshwater production methods are refrigeration method, osmotic method, electrolysis method and distillation method.

Osmotic method: saline water loses its salts and turns into fresh water after passing through a membrane that prevents the movement of salts. By converting solar energy into mechanical energy, it will create the necessary force to carry out this process. Environmental problems due to the maintenance of replacement membranes is one of the most important challenges of this method.

Electrolysis method: using an electric current, salt ions are separated from saline water and salts are taken by passing saline water through an adsorbent. In this process, the electrical energy obtained from solar energy can be used. The small volume of water produced as well as the high time required to produce it is the most important problem of using this method. 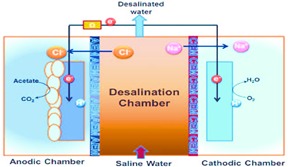 Distillation method: A high percentage of installed desalination plants in the world use the distillation process. When boiling salt-containing solutions, only water evaporates and solutes remain, so steam can be distilled in various ways and pure water collected. The separation process is almost complete, but the latent heat required for high evaporation has been developed as a result of various processes to minimize energy consumption. One of the most important problems of this method is the latent heat loss of the condensate, which causes a severe reduction in efficiency.

Solar energy is the most unique source of renewable energy in the world and the main source of all energy on earth. Availability, high economic advantage, installation costs, very low maintenance, ease of transportation and handling are the most important advantages of using this energy. 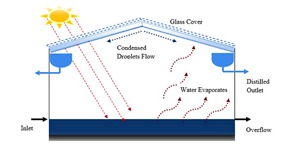 The following are the general specifications of the desalination plant designed by Arman Group:
• Solar desalination using distillation method
• Use of solar concentrators to preheat the salt water entering the device and reduce power consumption
• Use of two salt water supply tanks for continuous operation of the device
• Prevent latent heat loss of condensate and use it to preheat saline water to reduce power consumption
• Using a multi-stage system with a saturation pressure controller proportional to the temperature of the salt water entering each stage to maximize production and reduce power consumption
• Use of steam pump ejector to control saturation pressure and reduce power consumption and maintenance costs
After passing the solar concentrators and preheating, the saline water enters the feed tank and from there enters the device. At each stage, the ejector adjusts the saturation pressure according to the temperature of the inlet saline water. Some of the salt water evaporates as soon as it enters each stage and the remaining water is transferred to the next stages for evaporation. It should be noted that before entering the solar concentrators, saline water passes through the pipes that play the role of condenser in each stage and together with a fogging system causes the steam condensate produced in each stage. This prevents the condensate from wasting latent heat, pre-heating the incoming salt water to reduce power consumption and ultimately increasing efficiency. The following figure shows the schematic design of this desalination plant:
The following figure shows the schematic design of this desalination plant: Plant capacity, type of technology, groundwater salinity, final product quality, and operational and maintenance variables are determined. Energy costs can account for up to 70% of the total cost of sweetening. For this reason, the availability and usability of energy is a major factor in the application of new desalination technologies. The energies required for the proposed scheme are thermal energy and electrical energy, which are estimated in the table below: